Dr Paul Bramadat is an Associate Professor and the Director of the Centre for Studies in Religion and Society at the University of Victoria. He has been involved in studying the ways religious fundamentalists survive, and sometimes thrive, within secular societies since the mid-1990s, when he conducted fieldwork among a group of Protestant evangelicals at a secular campus in Ontario.  That community – the Inter-varsity Christian Fellowship at McMaster University – is clearly far removed from ISIS and Al-Qaeda, but all of these groups share the need to address, and perhaps to fix or fight, a world in which they feel trapped, and a world they often believe to be bent on their humiliation.  After 9-11, Dr Bramadat began to assess the forces involved in the complex negotiations between religious minority communities and dominant secular societies.  In all of his research, his concern has been to understand the way personal and group identities come into being against the backdrop of sweeping and rapid social changes that have been seen in the post-colonial and post-9/11 period in which religion has returned to the political arena with a vengeance. For over a decade he has worked on the links between ethnicity and religion, religion and multicultural and immigration policies in Canada and abroad, and then more explicitly on the dialectical relationship between radicalization and securitization. He co-edited, with Lorne Dawson, Religious Radicalization and Securitization in Canada and Beyond (UTP, 2014), a book that has helped scholars, students, and policy makers to improve their understanding of the religious dimension of the personal, political, and public controversies surrounding radicalization (especially among those who would otherwise seem “like such nice boys”). 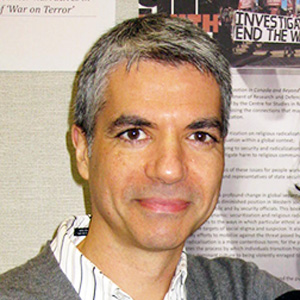 University of Victoria
See All Affiliates
Skip to content