Lieutenant Colonel Patrick O’Halloran is an Assistant Professor at the Royal Military College of Canada.

He is also a serving member of the Canadian Armed Forces with over 30 years of service.  His professional experience has included a tour in Bosnia, collaborating with other government departments on Canada`s operations in Afghanistan, and planning for NATO counter-piracy operations and support to AMISOM forces in Somalia. His PhD is in international relations and he holds a Master of Arts degree and a Master of Defence Studies degree.

His current research is on terrorist resourcing and he is the project lead with two others professors and three student researchers of a project funded by Public Safety Canada.  The aim of the project is to advance the state of knowledge about resourcing activities in or with connections to Canada that support terrorist threats to Canada and/or to other countries, and ultimately about effective means to address the resourcing process, from prevention and intervention through to prosecution. 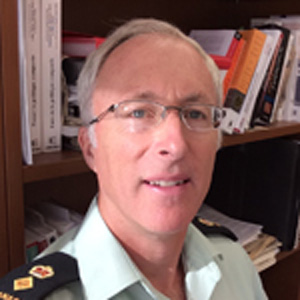