Amal Abu-Bakare is a Lecturer in the Politics of Race & Decolonial Studies at University of Liverpool. Amal’s research project focuses on the theorized existence of a racial world order, wherein global efforts to combat terrorism hypothetically reside. It is a comparative study of UK and Canadian counterterrorism policy. Her interest lies with examining the politicized existence of the ‘racial Muslim’ and how counterterrorism debates address the marginalization of people of colour as intersecting categories of difference and othering.

Her work has focused on International Relations Theory, Middle-Eastern Regionalism, and Security Studies. Her previous educational training has allowed her to specialize in postcolonial and decolonial theory and qualitative and interpretative research methods. The aim of her research is to inform counterterrorism policy actors about how counterterrorism policies might have consequences that reinforce, rather than ameliorating structures societally divisive structures or practices. It is her hope that such inquiries hold the key to more equitable and humanized strategies of addressing terrorism, both domestically and abroad. 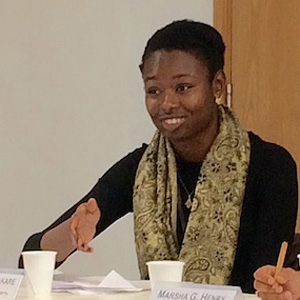